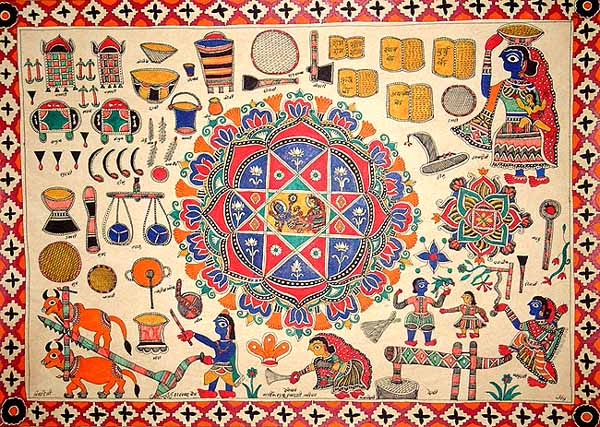 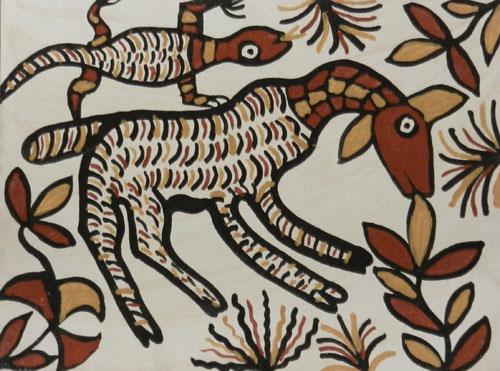 In many districts of Jharkhand, there has been a rich tradition of Kohhabar and Sohrai. The word Kohber is two words 'KOH' and 'WAR' is considered to be WANA. The meaning of Koh or Khaah is the cave. The 'groom' is called, so the meaning of kohber is the bride's room. Koh is still popular with this name and today even the Kohbara Vihar, Madhubani / Darbhanga etc. are made or written in a grand manner. Probably today's Kohsh Art is a modern form of centuries old cave paintings found in Jharkhand. Hazaribagh is primarily tribal, with the colors of elaborate painting. This depiction of natural and mineralization on the walls of methi is entirely done by women. This illustration is very artistic and so clear that reading can go. The theme of the pictures of Kohbar is usually the reproduction, female-male bonding, magic and sorcery, which are represented by symbols of husbands, animal-eaters, tortoises, which are popular and valid for the growth of the race. -Bang, elephant, turtle, fish, peacock, soup, lotus or other flowers etc. Apart from these, various forms of Shiva and human figures are also used. These images are placed in full size on the outer or inner walls of the house.

There are two styles of different picture making. To prepare the background on the walls of mettooti is done with a coating of mite (manganese) hand or with a broom. On drying, coating of white mittoo (cooleen) is applied on top of it. On which the different shapes of the bass / plastic shoulder are made in the wet state, "Huss type is formed that the white maturation of the above is removed and the shapes in the black mud of the bottom becomes clear". Four eclipses are also used in place of blindness. In the second method, the surface of the wall is made and the shape of the cloth is made, or the cloth is placed on the core of the teah, and the figure is painted with a figure, usually in the form of white, ocher, ginger, yellow, green etc. Coarse paintings have been used for centuries in the villages of Hazaribagh district, in Jiskkath, IISCO, Shandariya, Sahaida, Dhetharige, Kharati, Raham etc.Sohrai festival is celebrated immediately with the harvesting of Diwali. On this occasion the tribals make pictures of their home walls. On the day of Sohrai, the lora of the village takes animals to the forest in the morning and welcomes them at their door in the afternoon. In this sequence, they depict "Arifan" at the door of his house. "Aripan is done on land. The soil is cleaned with dung / paste. Then the solution of rice flour is portrayed as "Aripan", which forms in a geometric shape, enters the animal house on these paintings, this depiction is done only by the women of the house. Every daughter finds her mother or other senior women in the house.In the picturesque pictures, the background of the walls is to the original color of maturity. It is made with brown resin, lap (cauleen) and black (manganese) colors. According to various tribal groups or sub-castes, some variations have been found.