In the Sadan women, there is an ancient tradition of dug digging. It used to be tattooing in almost all organs of our body. The pictures used in the tattoo were different names for all such as: Mahadev Jund, Pothi, Kasali Flowers, Bunda Garia, Rice, Dhaar, Charai Gode etc. In the throat, laughing, hackle, hand ginger, peacock, lalva, strawberry flowers, potty, bunta in finger, shape of pianari, ankal in the feet. Khoda Malarines dig the women. He used to put turmeric oil to dry the dough quickly, and on three evenings the dew was flowing in the couch and he was cured. 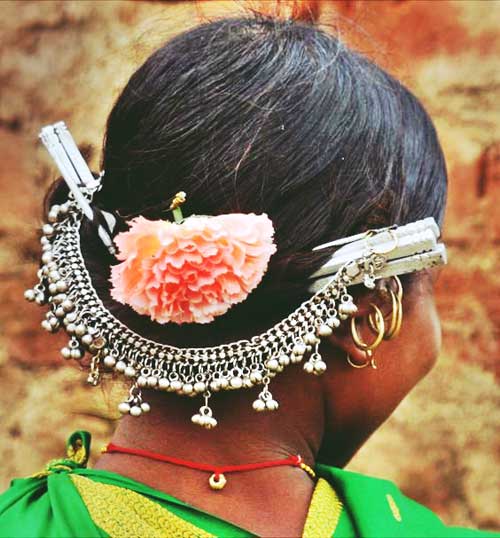 Khongoso: - This is useful for keeping a silver-faced juga handling. It is used in making artistic twins. As the name implies, it was named Khansso due to the tearing of hair.

Chawnwani and Panapatta Khonso: - In silver pots, silver chawni is mounted on the upper side. In some cases, there is a knife at the place of the chowk in Sikdi. Panapatta Khongoso has a pan leaf shape, and it has three types of sticks and curls in it, which increases the beauty of the contestants.

Kalyp: - It is made of silver in various designs. In the clippers, the bottom curl is a thin groove, which keeps both the clips together. It is applied to the hair on the ear. 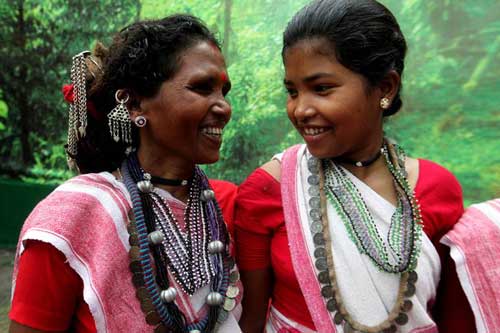 Karanful: - These are made from gold and silver worn in the ear. In the middle, the round dome is surrounded by two striped gold wire on its edge, then there is a small sculpture between the leaves rising and middle. Which is attractive to watch. Even today it runs very well.

Kanpasa: - It is a gold ornamental jewelery covering the entire ear. It has five or seven rounds in the bottom. The moon, the stars, the lotus, etc. are kept in it.

Suprakana: - The men used to wear gold or silver over their ears.

Besari: - It is worn in the bottom portion between the nose. It covers the face of gold, it is scattered in the face of a carved face, and if any call is so large it covers the whole mouth. At the time of eating food, women have to eat them by hand holding one hand. 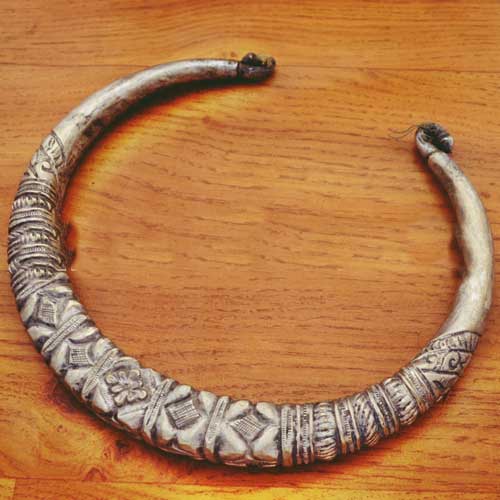 Haasli: - It is made of gold, silver, copper etc. The middle part of it is thick, non-folding, the throat part is made of thin, and in different designs flowers, fish, conch etc. are made, it is made up of about 40 paisa silver silver. Since silver and weighing are sold due to good prices, in a way it is their capital.

Khambhiya: - It is made of silver jewelery, like a twig. In which the pictures of flowers, leaves, peacocks etc. are covered in the composite part, in which there are red, black and black spots in the middle.

Sitahaar: - This necklace has five laceted silver necklace, two strokes on the neck, the number of scales from the top down and the size of the lacquet becomes larger. This makes four moons in the beauty of the throat.

Kanthamala: - This silver round goal is hollow from inside. In this thread, there are four striped red, blue or black chhota coral mouths between the center of the gland. The thread has a thread, a round neckline in the corrugated section.

Chandrahar: - It is made of silver, engraved on both sides of the neck, in leaf leaf form, in which there are two lrees in the upper straps and three strokes below. Looks attractive and beautiful. 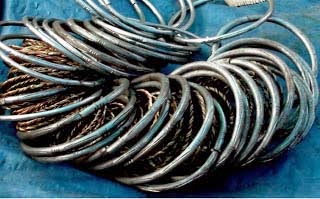 Tad: - This silver is thick, round, carved, hollow from inside, one place is open. The ladies of this house wear it on the right side of the elbows.

Bajubandh: - It is made of silver thread made of thread, which is tied with bandage in the arm. In the bondage, the goal of silver above the lump is rounded and the swinging keeps swinging.

Thela: - This entire goal is worn before the thick, silver, hollow, carved bangle of silver. That is why it is called Aguva.

Kangna: - This gold, one finger of silver is chaired, carved and lacquer from inside.

Behinkal: - Men also used to wear silver in the arm, silver bronze. It is almost like a women's armchair. 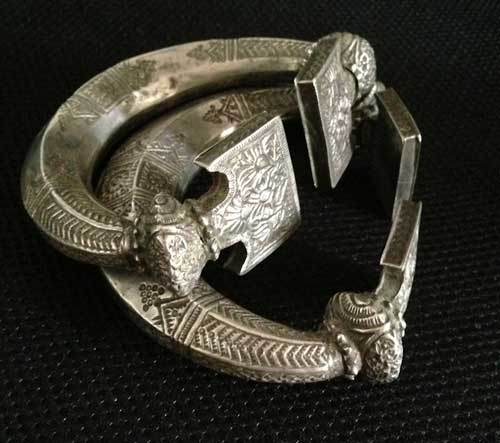 Payari: This bronze, brass, silver curly, or even without a knife, has a hard navy. It is inserted directly into the foot. There is no link to open from anywhere. It wears both big and child.

Payal- Silver ankle is made in various designs such as Amba, Amba Patai, Barley Manji, Khera Manji, Kobi Patai etc. There is a link between it and it is curved.

Goodram: It is a silver gulat's round, hollow, thick in the middle, a place opened, a closed shutter too. Metal bullet fired for it to be built inside. It is carved.

Angutha: - It is a weft, a bronze, bronze, iron, silver round goal plane or a vase in the big toe of the foot.

Jhatiya: - This bronze, brass, iron wheel is thick and is worn in three fingers of the foot.

Qatri: - It is a bronze, brass, a thin round made of iron, and wears it in the smallest finger of the foot.

Beechia: It is made of silver, dressed in all fingers, fish, leaflet, conch, flower etc.