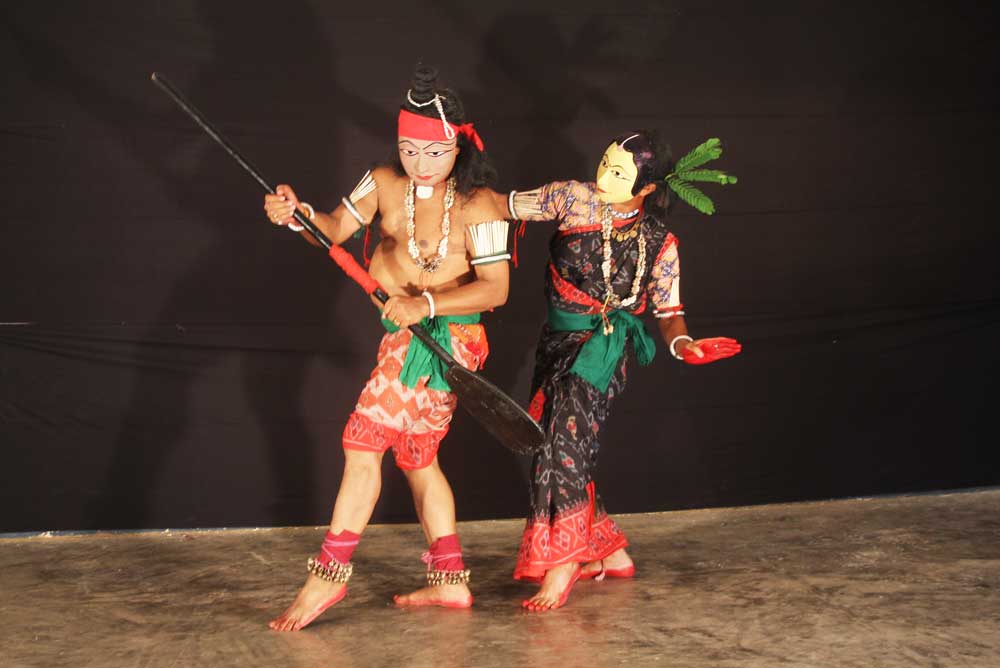 During the days of puranas, Singhbhum (including Saraikella - Kharsawan) was in Odisha. Saraikella is a small town situated on the holy kharkai river in the south. It was once the seat of the Royal Singh Deo family, members of the Rajasthani Rajputs Clans who migrated here in the seventeenth century. The Simbha Dynasty had ruled over the now extinct are called Singhbhum. Singhbhum is contested, as in the tribal munda Diabet ‘Sing’ means “Sun” and Bonga means “GOD”, the sun god as the creator of the universe.

Saraikella and kharsawan, the twin princely states of British India, were established in the year 1615.20, by Raja Kumar Bikram Singh and his descendants. After Anglo- Maratha war of 1803, Saraikella state was included under the governance of Chotanagpur commissioner, where as Kharsawan was recognised as state after 1857, post independence, they were merged with the state of Odisha then Bihar and ranked as sub – division. Now saraikella – Kharsawan one of the twenty –four districts of Jharkhand. Saraikella boasts of the rich cultural heritage. Home to the world Famous Chhau Dance, Saraikela is the nerve center of art and culture in Jharkhand by lush green forests, hillocks, serpent like river and river belts. The Administrative structure of the districts consists of 9 blocks and 136 panchayats.

Saraikella has been the “Mecca” for connoisseurs of Music and Dance. Here lies the Citadel of World famous Chauu dance. The soil of Saraikela is Vibrant with the rythm of Chhau which faciened the imaginations of not only Indian art lovers, but also allured and captivated art lovers across the world.

Due to its unique charm, grace depicting various themes taken from my chology, Mahabharat, nature, daily life of human being and local folklore.

UNNESCO has mentioned Chhau dance in the representatives of Intangiable Cultural Heritage of Human.
The Chaitra Parva is the festival celebrated in the month of April every year. In its early, it was conceived to be a religious festivals, it has been converted into an art festival with religious forever. During the Chaitra parv the people pray to lord shiva & Shakti to bestow happiness and prosperity to them. The celebration of Chitra – Parv “Chhau – Mahotsav “involve Chaau dancing and spreading the message of Love and harmony all around. In the Year 1960 Govt. Chhau Dance Centre was established by the state government for promotion, propagation and its development in the unique Chhau School.

Sairakella is a member of the Eastern states Agency. The small State, protected by natural barriers of mountain and stream has preserved its cultural and political integrity through the ages. It is thus priviledged to offer to the art – loving public a highly perfected and specialised form of hindu dance in a pure state. The saraikella dancers represent a school and the manner in which the tradition and forms of dance have been preserved, developed and extended in the land is perhaps unique. For the Rulers of Sarikella have been patrons of the art not in the usual way of merely giving the workman his meat. They have themselves been its exponent and torch Bearers and carried the flame down premival times. Different branches of the ruling family have been appointed different dance forms which it has been sacred duty to develop and perfect. The Dance has reached us as an unbroken stream and it has taken the impress of loving and devoted souls of every generation who have pursued the beautiful for itself in the midst of leisure and plenty.
Chhau Dance sunchronises with the advent of springs when the heart of man dances to cosmic joy and rythm. The Dance is celebrated annually in the month of Chaitra (March - April) in honour of Shiva. For three consecutive days princes and peasants collaborate in the dance. The motifs are drawn not only from the moods and aspects of the whole range of animate and inanimate nature but also from typical rythms of the human heart as embodied in the episodes of the Ramayana and the Mahabharata and the Picturesque mythology of the Hindus. There is no repetition, no monotony of dance –forms in the Chaitra – Parva (spring Festivals). Competitions are held during the festivals and the Maharaja of Saraikela who is the Judge (sabhapati) awards a flag, which is the trophy for the year, to the winning party.
Chhau (Skt. Chhaya - Shade) is a masked dance. The mask needs no apology in the realm of the historic art. The Masks of saraikella are exquisite and help to evoke in the apectator by means of lines and colours and moods (Bhava) and the aesethic sentiments (rasa, lit, flavour) aimed at by a dance. They are the work of skilled men who have learned the trade from their fathers and the princess themselves are often among them.

Naturally Chhau dance has developed along special lines conditioned by this features which while leaving room for the different head – gestures (isirobheda) and neck movements (griva bhedha), eliminates the different glances (dristi bheda) as modes of expression. The masks have also served to conceal the identity of the dancer from the audience (sabha), so that the skill is the only element that counts and neither the personal beauty nor the sex of the artist determines the choice of the exponent of a particular dance form. The saraikella dancers of the spring Festivals are all males and while the artists are not deflected from their creative activity by the sex impulse, the audience are not even aware of the novelty, so perfect s the representation of feminine grace and loveliness of movements.

The musical background of the dance is austere and simple and aims through melody to produce the bhava and rasa of a dance form. The instruments are native drums and brass symbols, the flute of Krishna, the cosmic Lover and the lyre of Saraswati, the Cosmic Wisdom. They create a harmony never obstructive, always subservient to the dance.
Chhau Dance follows the basic principles of Hindu Dance which has evolved a technique of its own, inspired by its own, inspired by its own concepts and ideals. To the Hindu dance is a representation of cosmic rhythm. Shiva is the cosmic actor and dancer (Nata-raja), whose gestures and postures is the world, whose speeh is the sum of all languages whose dress and costumes are the moon and the stars. He sets forth through ‘many aspects, benign or terrible, the dance of the universe and of life, creating, sustaining, and destroying from age to age. Dance is thus associated with worship. Yet there is no prudery in it but a frank and dispassionate acceptance of all that is lovely in nature, man and woman.

The ancient Hindus “Danced” their plays instead of “acting” them. The peoples of Java and Bali still depict stories from the Mahabharata and Puranas by means of dance. Dance is rhythm and gestures  for suggesting rasa and Bhava. It has a peculiar Language. The toungue is slient but the whole body does the talking.but the language of dance is artistic and symbolical, rather than natural and simple. Nothing could be more foreign to any actual field of battle than the form given to a battle scene in the dance. But if some fairy land had been governed by the rule that fighting must be done rhythmitically, a false step entailing defeat., then this is a kind of battle  that would have been waged there. Gestures constitute the alphabet of dance language. Gestures endowed with rhythm and used by themselves are the language of dance (Nritya). Hence gestures have been studied and classified. Thus Nandikesvara writes of nine gestures of the head, eight of the eyes, four of the neck, twenty eight by one hands, and twenty – three by both the hands and indicates the use (Vinioga) of each. He treats of the other gestures for representing gods, the ten avatars of Vishnu, and so on.He also defines postures and movements of the body that depend principally on feet, mentioning sixteen modes standing and sitting, five kinds of Spiral movements, and eighteen kinds of Gaits.

Hindu dance has thus a definite code of gestures and movements to which the artist must confirm. His meaning must always be clear just as his motifs are defined and sculptured. The most assiduous training and rigorous discipline are necessary for mastery of the dance – language. Hindu Dance is self- Conscious, sure of itself, and suggest norms not only of dancer (Nata) and dancing girl (Nati, Patra) but even of judge and audience.

When Chhau Dance was first recited outside Saraikella as an art rather than as an immemorial ritual, the shackles of custom imposing on it a purely masculine personnel were inevitably loosened and skilled girls are included in the troupe. This was not a concession to modern taste but a liberation of art from social conventions, for the Hindus have from the earliest times recognised the female dance (lasya) side by side with the male dance (tandava) and indicated the contrasted potential excellance and special field of each. The dance has thus, for presentation before a wider public, eliminated those punctilious details of a rituals which would appear bizzare to the foreigner.

Chhau Dance is now exhibited for the first time outside India. Nothing short of the genuine article is offred the same dance forms. The same music, the same skilled personnel of princes and plebicians of the spring Festivals of Saraikella. There is nothing parochial in it, for through the themes have an indian colouring, they ae of universe appeal and the language in which they are expressed is cosmopolitian. Further, Chhau dance is neither a “Revival” lacking in the romantic background of a heritage claiming fond devotion nor is it an celetic compendium of diffrent schools of dance- representaion which fails to produce a harmonious total effect. Chhau Dance is an- artistic unity, preserved and developed with jealous care by a people whose treasure it is.