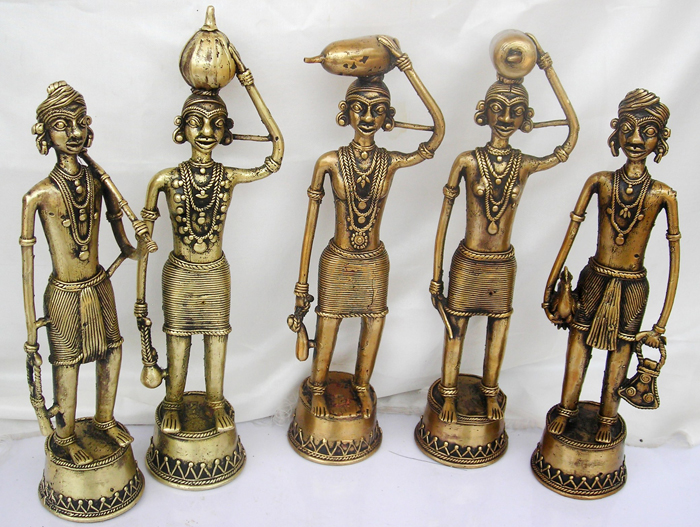 The work of metal crafts has been done in various parts of the Jharkhand region since ancient times, Asur, Birhore, etc. have been formed by tribals. In this context, the Ashtavatra Muni of Jain Tirthankar found during the archaeological observation from Aluvara (Block Chandan Kariyi, District Bokaro) can be discussed, which is currently stored in the Patna Museum. Locally, the use of barrage and household utensils have been produced long before, but the subject of special discussion is a garlanded character, which was traditionally made as a tribal unit of pilot, 'Paila' But now many useful and decorative items such as lamp or shape of a bird etc. are also being constructed.

Historically, it is well-known in respect to the Asur tribe that by making the iron ore scarf, this caste is making the domestic, domestic traditions of Lohai, but the Lohra of the Birhore tribe has been well-versed in metal crafts. Hence, the important work being done in Jharkhand in the field of metal crafts is the creation of Dhokra characters, which are being made in this area since ancient times.

Apart from Jharkhand, these types of artwork are also made in Andhra Pradesh, Chhattisgarh, West Bengal and Orissa through the 'Lost-Wax' method. This method is an altered form of 'Sire-Paiyu' method.

"In pompous memories," Piela is the most popular character, by which the work of measuring rice etc. is done.

'Pahla' is very popular in country and abroad as a souvenir. "In addition to the pilea, the common utensils of athletic kitchen, animal-statue statues and candle stands for decoration are also being made abundantly now." The trunk is produced by Lohadoh of Ranchi district and Ichaka of Hazaribagh district etc. Places are being prominently done.