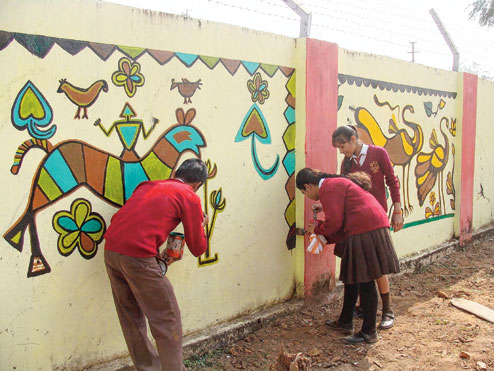 From the early times, the land of paintings has walls, chestnuts and walls of caves. The tradition of surviving on this illustration is alive in various forms till date. No corner of the world and the country where inhabited tribes are deprived of mural depiction and Bhiti marking practice, which is aimed at religion, magic, social events, human aspirations, different types of festivals, daily life and flowers, Organisms and so on. These very expelled tribes have been portraying the walls of their houses, in which some marks have been done only for decoration and beauty.

Stone paintings have been found in the caves located in Hazaribagh district. It is not a coincidence that even in the entire Jharkhand region, the art of painting the walls of the house in Hazaribagh area is the most attractive and most popular. If research is done then it can be possible to determine the evolutionary order in Soharai art.

Kohbur painting tribe is a work of women, which is mainly painted on the walls of the house during the wedding festivals from January to June.

Apart from these murals in Jharkhand, another style is also known for painting, which is known by the names of Jadopitia. Although it is found more or less in all parts of the state, it is more prevalent in the area of ​​the lathagraha.

Jadoptia is a vertical figure (Scolle Patira), which is being made by the members of the family of Junkies in Santharpargana.